Which Municipalities Absorb the Most EU Funds

The current inability of Bulgarian municipalities to carry out independent fiscal policy leaves EU funds as the only option for financing local projects. The prior statement is especially true for undertakings, which require significant capital investment, such as building a sewage-treatment plant. It goes without saying that the efficiency of the use of EU funds depends highly on how and for what purpose they are spent. This means that 1 million BGN spent in one municipality may lead to greater benefits than 10 million BGN spent in another. Therefore, the actual amount of operational program funds, provided for municipalities as beneficiaries, is one of the main indicators of the success or failure of municipal administrations – if nothing else, at least it is a signal of activity and administrative capacity.

Up until mid-May 2016 Bulgarian municipalities have received close to 5 billion BGN, as beneficiaries of the EU operational programs. This sum includes only the amounts that have already been paid (and not those that have been agreed upon) for the entire period since Bulgaria’s entry into the European Union, which means that the data is cumulative and includes previous program periods as well as the beginning of the new period. In order to make a comparison between different regions and municipalities we divide this sum by the annual average population.

Bulgarian municipalities have received 689 BGN per capita of the annual average population by the middle of May 2016 compared to the 565 BGN/capita in the beginning of 2015 and 380 BGN/capita in 2014, when our previous analysis on the subject were published.

This higher rate of absorption of EU funds during the past two years was expected in light of the end of the prior 7 year program period (2007-2013) and the opportunity for using the funds until 2015.  Of course, the more efficient utilization somewhat reflects the increased managerial and administrative capacity of some Bulgarian municipalities, at least concerning the governance of EU funding.

The analysis of the data leaves these main impressions:

Utilization on a Regional Level

The lowest absorption rates are in the districts Kjustendil (367 BGN/capita), Sliven (378 BGN/capita) and Ruse (472 BGN/capita). The municipalities within the Burgas district have utilized significantly more funds per capita for the period January 2014 – May 2016 (578 BGN), than these three municipalities for the entire program period. 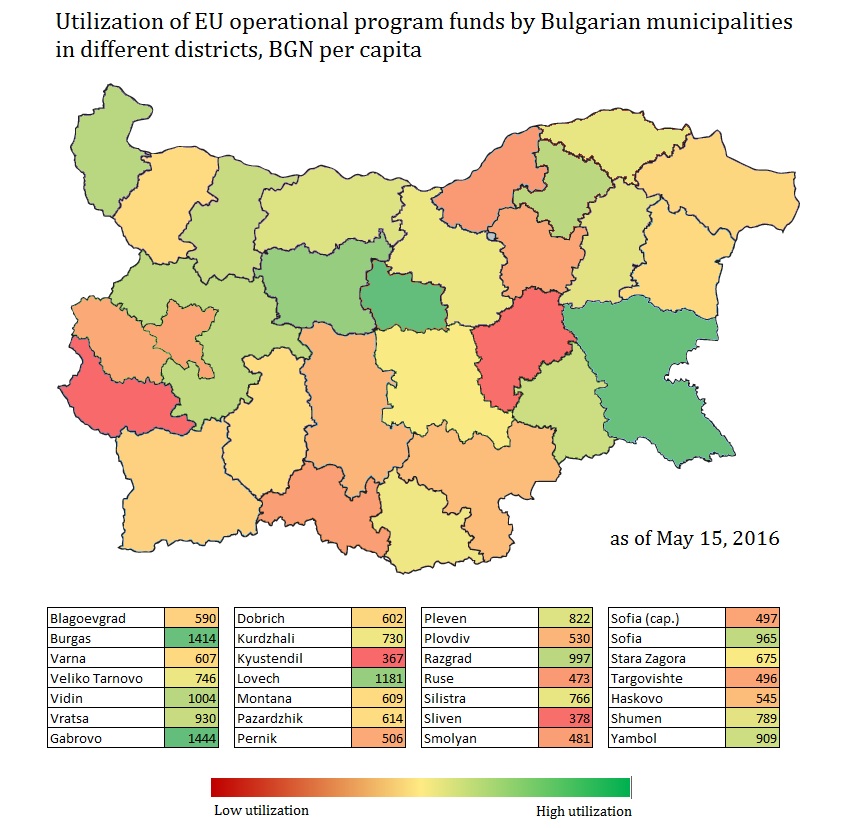 Utilization on a Municipal Level

The worrying fact is that the number of municipalities, which utilized less than 100 BGN per capita, remains unchanged (30) since 2015. The majority of them are small and the biggest ones are Kirkovo (Kurdzhali) and Dulovo (SIlistra) with a population of respectively 21.4 and 28.0 thousand people in 2015. 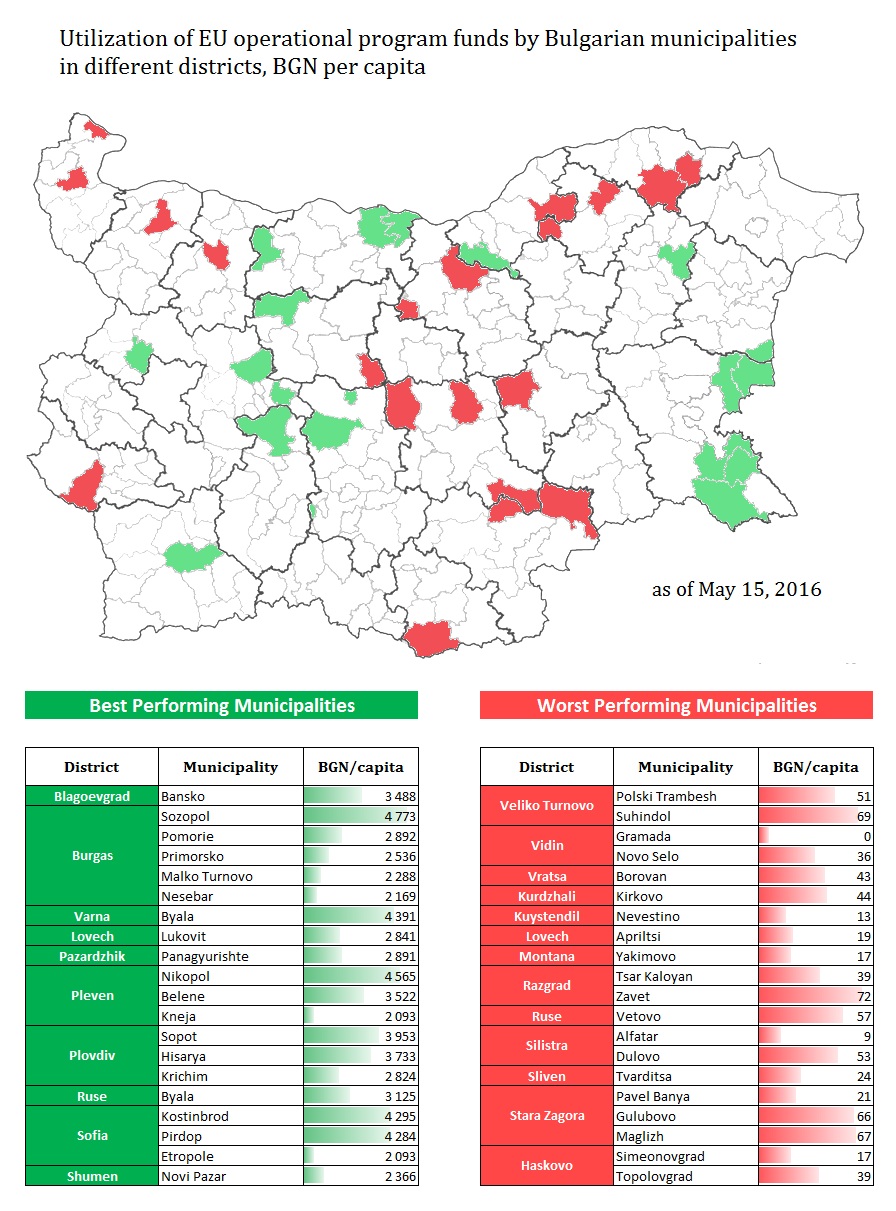 Problems with the absorption of EU funds exist due to many factors such as the lack of administrative capacity of some municipalities, the low quality of their strategic development documents, the central government’s tendency to pick political favorites from certain municipal administrations, the failures of public contractors etc. In many cases the strategic documents follow pre-made templates instead of serving as long-term sustainable planning instruments for the development priorities of municipal governments.

Utilizing EU funds isn’t a panacea for the challenges faced by the Bulgarian regions. On the contrary, the fixation of municipal administrations on EU projects leads to negligence towards other aspects of regional development such as creating an environment that is favorable to investment. Unfortunately, for many Bulgarian municipalities EU projects are used not as means of increasing investment but as its alternative. This is due to the last few governments’ renouncement from a financial decentralization policy.

The growing gap between the municipalities achieving high absorption rate and those at the bottom of the list shows that the demographic reality in Bulgaria leaves some municipal communities with serious challenges in terms of securing enough administrative capacity for managing EU funds. Despite territorial-administrative reform not being a priority, this is a process which cannot be avoided, especially if the fiscal authority of municipalities remains unchanged.

* Bozhidar Radev is an intern at the IME.