2015: We will be Working for the Government Until May 2nd

During this year we will be working until May 2nd to pay up taxes to the state. Figuratively this is the day when citizens will stop working for the government and start working for themselves. The date marks the time when state coffers will be full if everything produced in the economy is instantly confiscated by tax authorities – we call it Government Freedom Day while worldwide it is best known as Tax Freedom Day.

In 2014 the government budget was seriously out of control, which means that everything the state borrows is not enough at all to cover the government spending. If we go a little further with our symbolic account, taxpayers will be released from paying to the state between May 2 and May 13, but practically these days sooner or later will have to be worked off in favor of government. These 11 days characterize the budget deficit for 2015.

The methodology for the calculation of TFD is relatively simple – we compare consolidated government revenue with the country’s GDP. For that purpose only official government data and forecasts are used. We use revenue and not expenditure because it shows how much has been taken away from individuals and businesses during the year. Transfers are not included because they don’t come out of taxpayers’ pockets – these are mainly from the EU.
In 2015 Bulgarians will produce around 226 million BGN each day, measured by the expected GDP (as assumed in the report accompanying the state budget act for 2015). Therefore for the current year, 121 days will be necessary to produce the 27 billion BGN revenue for the consolidated budget. The 11 additional days are there because of the 2,5 billion BGN deficit.

What does all this mean for the Bulgarians?

The calculations above represent average values and bear little information for individual citizens. The tax burden in Bulgaria is different for different people but most substantial for working Bulgarians, who pay their taxes properly – they pay income tax, social security payments and consume more, so they fill the state coffers with VAT and excise taxes. For those Bulgarians who can be defined as “middle class”, the Tax Freedom Day might come even in the summer.  On the other hand, for Bulgarians who do not work or are part of the grey or informal economy Tax Freedom Day comes much earlier.

In any case every Bulgarian citizen fills the state coffers one way or another. We will spend most of our time to work out the revenue from VAT – 35 days. We will need 19 days for the revenues from excise taxes. For social security payments and health insurance we will work 30 days – 21 for social security and 9 for health insurance. The revenue from income tax will take us 12 days and corporate taxes – 7 days. Another 8 days will be needed just to come up with the money to pay for state and local fees.

Is there a reason to celebrate?

In the last few years the Bulgarian taxpayer has not a reason to celebrate the Tax Freedom Day.  In the last 5-6 years, after the beginning of the financial crisis of 2009, there is not even one reduced tax. On the contrary, the tax burden increases with the establishment of new taxes (like deposit interest tax), the excise taxes increase and the social security burden increase (social insurance income thresholds).  Except that the state runs up big deficits and has lost its investment-grade credit rating. Only for the current and the last year (2014-2015), the state runs almost 5,5 billion BGN deficit, which means 25 days to work off. Just imagine a year when every furlough day is not a time-off but a day to work in favor of government – this is the deficit for the current and the last year. 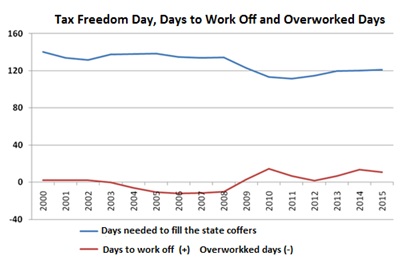 The graph shows Tax Freedom Day in the last couple of years (in blue), as well as the days to work off and the overworked days. Practically these days show a surplus or a deficit in the budget.

If there is a surplus, taxpayers will have over-worked for the state, meaning they paid taxes and the revenue from those taxes was not immediately used by the government – these are represented by a red line in the negative values.

If there is a deficit, the taxpayers sooner or later will have to work for what was spent in advance – these are the positive values of the red line. If we look at both lines we can see that the situation in 2013 becomes worse and compared to 2012 the number of the days we work for the government and the number of the days to work off increase.