The Successes and Failures of Bulgarian Governments (1998-2012)

The review of all published audit reports of the Bulgarian National Audit Office in the period between 1998 and 2012 (747 in total) gives a clear idea about the work of the public administration. Its scope includes about 40% of the budget expenditures for the period.

Each report was reviewed, summarised and evaluated by the IME team through previously determined assessment indicators. The activities of the administration that fall under review can be provisionally classified as either “successes” or “failures”. The activities whose completion and results do not allow them to be placed in either category were defined as “unclassified”.

The complete database of the study is available here (BG).

The results of the study are alarming – the administration has failed in more than 40% of its activities, which cost Bulgarian taxpayers at least 50bn BGN. 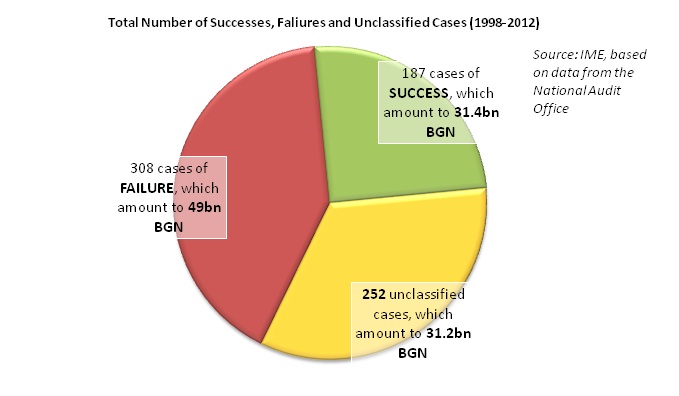 The overview also identifies some specific losses, for which data was available in the reports. They represent the amount of resources that are considered a “direct loss”. The National Audit Office has provided clear information and conclusions that either these funds were spent unlawfully, or there was not even a minimum benefit obtained from their use. We managed to identify net losses and unlawful utilisation of funds in more than 10% of the reports and in 1/4 of the cases classified as “failure”.

This year’s edition shows once again where and how the administration performs poorly due to either obvious manipulations and unlawful spending of public funds, or lack of expertise and inadvertent mistakes and inaccuracies.

It is alarming that the problematic areas remain the same and that there is no perceived decline in wrongdoings, nor there is an increase in the efficiency of public spending. Furthermore, the weaknesses do not depend on the changes of the government in office, but are chronically present in the administration.

The failures of the administration, which occurred in the management of funds and properties or in the conduct of programs, vary from nonfulfilment of goals and noncompliance with deadlines to dishonest accounting and unlawfully signed contracts.

The activities, in which infractions occur most frequently, are the delegation of public procurement and the management of property, especially in the cases of determining the rent and lack of property insurance.

According to the National Audit Office reports, the inefficient management of the administration’s finances and property is primarily due to:

In some of the institutions and programs under review there are specific direct losses for society and unlawful spending of funds without any positive result. In the case of many other types of expenditures, the results raise doubts or do not entirely correspond to the initial goal.

How can the governmental failure be reduced?

1.       Rationalisation. The fewer funds accumulated and spent by the state, the smaller the losses for taxpayers. The audit reports clearly show that in many cases the public administration operates inefficiently, ineffectively and uneconomically.

2.       Transparency. Greater transparency of the functioning of the administration will allow all interested parties to exercise control over the expenditures and the completion of tasks.

3.       Privatisation. An overwhelming part of the reported violations took place in the management of public property and the running of state enterprises. The state is not a good owner.

4.       Impact assessment. For every government program there should be a preliminary and a concluding evaluation of the impact, which should clearly show where, at what cost and to what effect is the state interfering.

The complete analysis can be accessed here (BG).