No Sensible Improvement in Bulgaria

Sofia – Institute for Market Economics (IME) is pleased to herald the publication of the 2012 International Property Rights Index (IRPI), the world’s most comprehensive measure of intellectual and physical property rights among nations. Sixty-nine international organizations, including IME, partnered with the Washington, DC-based Property Rights Alliance and its Hernando de Soto Fellowship program to produce the sixth annual IPRI.

Over the last twelve months, the world has seen the most dramatic turn of events in the political, economic and social life of the common man in the Middle East. It is a story of enterprise – one that is lost in regulatory red-tapism and overshadowed by government control and corruption. One can trace the beginning of such events to December 17, 2010, when Mohamed Bouazizi, a street vendor in Tunisia, immolated himself. Bouazizi’s attempted suicide (he later died in early 2011) is indicative of the repression that millions of entrepreneurs face in shadow economies across the world. Largely illegal, the shadow economy operates outside the purview of the legal system. Corruption and lack of property rights make it harder for entrepreneurs like Bouazizi to move into the formalized economic framework. To that end, recent events reflect the rebirth of Hernando de Soto’s pioneering work and original ideas that stress the need for legal empowerment of the poor to achieve economic success.

At the heart of it, this story of Bouazizi’s struggle is a microeconomic perspective on the problem of missing property rights in the Middle East. But the impact of the Arab Spring has also shaken the macroeconomic foundations of several countries across the region. In other words, what happens at the firm or individual level in developing countries (the so-called Bottom of the Pyramid), impacts the GDP accounts of national economies. It still remains to be seen whether the Arab Spring will bring greater economic freedom to the Middle East and beyond. But one thing is clear – secure property rights are fundamental to economic and political freedom. Needless to say, a lot of questions are now being asked by people across the world: What can a state do to promote greater economic inclusion through secure property rights? What is the impact of corruption on the spirit of enterprise? Some of these questions point to the fundamental inter-relationships between economic freedom, enterprise and secure property rights.

The IPRI utilizes three primary metrics to create a composite score: Legal and Political Environment (LP), Physical Property Rights (PPR), and Intellectual Property Rights (IPR).  Most importantly, the IPRI stresses the great economic disparities among countries with strong property rights and those without. Nations comprising the first quintile enjoy an average GDP per capita of $39,099; more than double the $18,631average per capita income of the second quintile. The third, fourth, and fifth quintiles average $10,394, $4,655, and $5,149, respectively.

The property rights situation in Bulgaria continues to improve, but still unsatisfactory. IPRI went up by 0.1 points, but LP did decrease this year. This decline was driven by weakening Rule of Law and Political Stability scores. Protection of Intellectual Property improved 0.3 points this year. A slight improvement in Copyright Piracy also helped raise IPR 0.2 points. 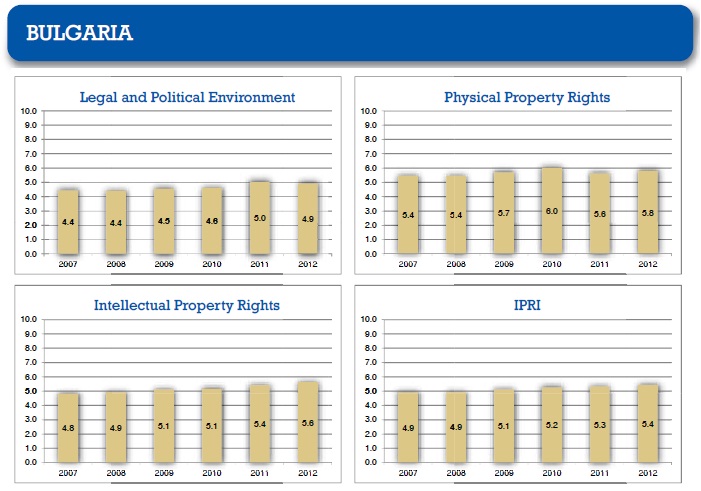 The 2012 International Property Rights Index (IPRI) serves as a barometer of the level of security of physical and intellectual property rights across the world. As in previous years, the index has revealed the important relationship between property rights, economic freedom and a country’s level of development. In our globalized economy, greater emphasis on securing property rights would help to bring in greater legal recognition of the assets of the poor. To that end, as we witness the Arab Spring, one wonders about the future – will countries (or national governments or the power elites) recognize the need for greater economic freedom or will repression continue?

The International Property Rights Index provides a comparative analysis and an instrument for future study to researchers, policymakers, and citizens across the globe. The Index encourages underperforming countries to develop robust economies through an emphasis on sound property law.

For more information, or to view the 2012 IPRI in its entirety, please visit http://www.internationalpropertyrightsindex.org/